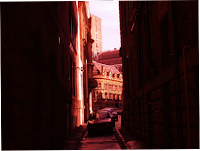 Full novel available now
Into the Circle of Fire

The distant sounds of traffic thundering on in it's relentless race mixed and mingled faintly with the wail of a police car siren as it receded into the unseen distance. In the air hung the ambient ambivalence of a billion people's discarded waste and refuse, hanging heavy and dark like autumn's mists.

Out of the shadows of a narrow entrance concealed by mountains of unclaimed and untended rotting rubbish stepped a tall thin man wearing a full length leather trench coat. Despite the gloomy darkness of the street, he hid his eyes behind the dark impenetrable black of shades. Hallmarks of the Assassins.

Slowly he began to walk forward, the rhythmic scrunch of gravel cutting sharply through the tranquillity of the night. At his side, borne casually by his left arm, a brown time-worn leather hold-all swung easily with his stride, its contents obscured for now.

He stopped once again and glanced round slowly, observing his surroundings silently but for the faint creak of Leather. After no more than a moment he moved off again. The scrunch of loose gravel under his feet marking his passage against the night.

"Looks like you strayed your pretty hard-ass arse down the wrong alley tonight!"

The voice cut through the still air. A youth brandishing a sub machine gun stepped out from the concealment that had been offered by a boarded up doorway.

The Assassin kept moving, ignoring the threat and not even turning his head to acknowledge the petty thief.

"Hey dipshit. Yeah you," came the voice again, "Time to get yourself a hearing aid or get yourself killed. Let's see the colour of your money."

It was as if he hadn't heard a thing.

The youth cocked the gun, the click of the bolt hanging in the air as an unspoken threat.

"Okay dipshit, you asked for it. I haven’t got time for crazies who think the World will pass them by if they ignore it."

With no warning and without stopping or looking round, the silent man produced a sawn-off shotgun from inside his jacket, and with a deft movement swung it over his shoulder.

In an instant it was over. The youth lay sprawled on the floor, features unrecognisable after both cartridges had done their work. One leg twitched for a moment, then lay still. He hadn't had time to scream.

The silent man didn't look back or break stride. Still smoking, the sawn-off disappeared back under the coat, and he was gone from the alley.

* * * * *
The Assassin came to the corner at the end of the claustrophobic back street, standing at the edge of a busy road bustling with pedestrians and traffic. Hundreds of people pushed and shoved along the pavements, laughing and shouting under the glow of club and café neon signs in a myriad of blues reds and greens.

In the central sector, every night was party night till late at the city's thousands of bars and night-clubs.

He paused at the side street's mouth, looking slowly round, ignored by the crowd. From two other side roads, appearing out of the shadows, came two more identically dressed Assassins. Each also carried the same brown leather hold-alls. The hit-squad was ready.

The first gave a discrete nod to the second two, and the bags dropped to the ground, leaving the mini-guns they had held exposed and ready. A scream went up through the crowd as they were spotted. Ripples of panic spread out along the pavements as people started running and pushing in a frenzied attempt to get out of the way.

* * * * *
With a deafening roar, all three mini-guns opened fire, streaks of flame darting from their revolving barrels directed towards the agency building. The glass façade turned to sugary powder under the barrage, raining down onto the now empty pavement below showering in a blanket of blue-white.

A passing car was ripped apart as it crossed the fire from the guns, exploding into a roaring inferno as it careered out of control slamming into a row of parked cars with a sickening grind of metal on metal.

From somewhere inside there was a huge resonating explosion as bullets found their way through the gas main and ignited it.

Furniture and bodies were blown out into the road with yet more glass shards, as the lower floor's gutted interior lit up in dancing oranges and yellows reflecting from the advancing flames.

* * * * *
As quickly as it started, it stopped. An eerie silence rolling in as passers-by watched on from a very safe distance, hushed and without daring to venture too close in case they too became victims of the onslaught. Only the faint roar of the gas flames licking through the building broke the strange peace that had settled.

The men walked slow and deliberately up the débris strewn front steps. Glass scrunching loudly underfoot, before they walked in where the entrance had been, into the depths of the shattered building unchallenged and unhindered.

* * * * *
Inside the building lay a scene of total destruction and annihilation. Furniture upturned and smashed up, gouged holes betraying where bullets had crashed mercilessly through. From the far end, flames steadily encroached into the room, quickly taking a hold of the wood of broken furniture and office paper from the filing cabinets that had been burst open spewing out their contents.

A survivor of the holocaust, an employee who had happened to be there at the wrong time, jumped up from behind the disembowelled wreckage of filing cabinets and desks brandishing a pistol.

A mistake for the brave to make only once.

He had time to fire no more than two shots before the closest Assassin opened fire with a short burst from his mini-gun, the heavy firing momentarily overpowering the roar of the encroaching flames. Both his shots never went near their targets.

If anyone else had survived, they chose not to show it for fear of a similar ruthless treatment.
Walking in strict unison, without bothering to take in the scene of their destruction, they headed straight for a set of glass strewn stairs, and made the uninterrupted climb up to the next floor with the steady crunch of fragments still grinding underfoot.

Here was less touched by destruction, most of the furniture being intact although glass carpeted everything. From outside there was little noise except the constant sounds of flames licking their way deeper into the débris.

Anyone who had survived the initial onslaught on this floor had made a quick exit through the fire escape as soon as the lull in the mini-gun fire came, leaving it eerie and abandoned.
The trio walked over to a steel security door set in the wall. Without needing to try to open it they knew it would be locked.

* * * * *
A curious silence had descended across the three research scientist left in the white-walled lab. Outside the noises, dulled almost to little more than a bass rumble by the heavily insulated walls had died away, leaving more answers than could be solved by conjecture.

Briefly the lights had flickered as an explosion, origin unknown, had vibrated the room. Two of the computer terminals had automatically rebooted, indicating that something had happened to the outside server line.

Scientists, ashen with the fear of the unknown glanced nervously to each other as rasping noises of metal being cut came from the one and only door to the lab. Heavily armoured, it could only be opened by secure keycode.

"Get down!" shouted one of the scientists to his comrades instinctively.

He and one other took cover behind equipment, but the third stood rooted to the spot.

As the door exploded inwards, the heavy metal structure disintegrated, taking him with it. He never realised what hit him.

Before the smoke dissipated, all three Assassins lunged inside. One scientist tried to make a break, and was immediately gunned down mercilessly. The other survivor nestled closer into the shadows afforded by equipment benches. This was no time to be a hero if you wanted to live.

Whilst two stood guard at the door, the third Assassin made his way to a complex looking machine, and extracted a number of samples from it which he pocketed. Turning his attention to the remote computer terminal sat alongside, he began tapping commands rapidly on the keyboard.

"Computer," he commanded in his flat monotone voice, "download all files classified secret or above to local drive from network."

"Please stand close to the retina scan plate to confirm authorisation." commanded the computer in its soft female tones, unmoved by or even aware of the carnage that had taken place just seconds before.

The man heaved a body from the floor and held the lifeless corpse close. A light blipped for a fraction of a second over the dead man's face.

First Technician Neadder's body slipped to the floor, but it was too late for the computer to know he was dead.

With astonishing rapidness, Terabytes of information flashed on the screen. Thousands of pages of text and hundreds of digitised pictures and film strips.

Within a few seconds it had stopped.

"All data downloaded. Proceed?" asked the computer in it's soft feminine voice.

He said nothing, taking the data cartridge from its slot and slipping it into a pocket. With the butt of his gun he smashed the terminal hard. The screen went blank before fuzzing over with static, and sparks flew from shorted electrical circuits with angry buzzing.

The three had collected all they had come for.

As quickly as they had arrived, they were gone, lost to the expanse of city and beyond. And in their hands was the information they had sought.
Full novel available now
Posted by Jennyemily at 03:51