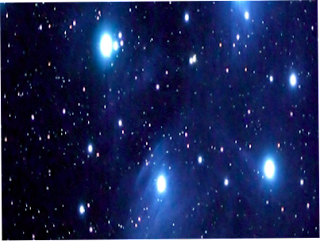 Sirens wailed throughout the ship as it shuddered from the Rösenbridge dimension back into real-space. For a few moments it was hard to react, to shake off the sluggish, sleepy feeling induced by the quo-fields that had held the crew in safety throughout the jump.

Zoë was the first to free herself from the restraints in her pod, and clamber groggily into the noisy corridor. She dashed to a console and keyed in her personal codes. For a moment the screen remained blank, then lines of text and data telemetry scrolled over it.

She sensed movement beside her.

“What’s up?” said Dezza in the calm twang that never betrayed emotion.

“Core collapse,” she said swiftly, jabbing at buttons. “It’s jumped us out of the Rösenbridge short again.

“Shit. I thought Tubs swore blind that he had fixed the core.”

She shook her head grimly and keyed off the alarms.


Tubs lay on the inspection trolley, grappling with the underside of a console panel. Wires stretched out loose either side of him. He studiously ignored the mess to soldier on with careful laser-pen work inside the electronics.

Dezza leant on the railing, watching him with strained patience.

“How long before the core is back online?” he demanded.

“Just a few hours,” came Tubs’ muffled reply from beneath the panel, “There’s a couple of stabilisers to realign, then calibration on the injectors. I’m not sure why they slipped this time anyway. They should have held until we could get to dock and have them refurbed.”

Dezza held his composure. It was not the first time the tugship had dropped from the Rösenbridge short. For the last two months it had become an increasingly regular occurrence, and one which had fast become tedious. The ship’s drive core was old and frail. There were only so many times that ancient electronics could be patched back together. Tubs might be a miracle worker, but there are only so many times that a miracle can be worked before hitting the dead wall of the impossible.

Dezza’s communicator buzzed, and for a moment he felt relief of something that would break the boredom of this unforeseen stop in deep space.

Zoë’s business-like voice answered, tinny through the electronics. “Have you checked the scopes?”

He frowned, sensing something not quite right in her voice.

“This one’s the furthest yet. According to the navigation sweep, we’re not even at the further colonies. The damn core popped us out more than forty days short.”

He glared down at Tubs’ feet, but the mechanic was oblivious and the gentle buzz of the laser pen drifted from beyond the pair of wriggling legs.

“That’s not the only thing,” interrupted Zoë’s voice.

He sensed the worry, and the note of concern. Tubs’ work was forgotten and he listened hard.

“The sweep picked up something else. About an hour’s jag away on the ion drive we’ve got a ship floating dead.”

“Have you tried to get them on the comm?” he asked.

“There’s no answer. You had both better come to the bridge. This drop might just be the break we’re looking for if that ship is what I think it is.”

“It’s easier if you’re up here and I can show you.”

Stubbornly she let the communications channel click dead with static. Zoë had a habit for the dramatic. Well, let them humour her. With the main drive core out of commission, it was not as if time was at a premium, for now.

He flicked the device into a pocket and kicked gently at the legs beneath him. A muffled cry shot out from behind the wires and he smiled.

“Leave that, for now. Zoë wants us on the bridge.”

Tubs slid out on the trolley, grumbling. But it was no use. When Zoë got one of her ideas it was best to go along with her. It was easier that way, on the times things went wrong. Then there was not the pain of having her argue for days of what might have been.


The holographic projection shimmered in the hot air of the cramped and dark bridge; stinking of ozone. Dezza wrinkled his nose at the smell. Zoë jabbed a finger at a small dot floating at the centre of the display. Ripples of static arched through the projection as the computer struggled to compensate for the untimely insertion of her hand into its image.

“This is what we’re looking at,” she said.

Dezza scrunched his eyes, trying to focus on what the projection was trying to show him. It was too small to make out.

She tapped a few buttons on the console, anticipating his struggles, and the image suddenly grew exponentially in size.

He stepped back in surprise before remembering that it was only a hologram.

The dot grew to the size of a cricket bat and sat suspended in the slight glowing field. He squinted; it was clearly some kind of vessel. Something big.

“Not big enough. Some kind of Starliner I think.”

He glanced to the reams of data shimmering in the air alongside the main bulk of the projector.

“She isn’t going anywhere if she is,” he said at last, “Computer says it’s holding a stationary position. It can't be docked, we’re several light years out into deep nowhere.”

He was not so sure. A derelict might mean an easy salvage to tow it back to civilisation and a guaranteed ten-percent, but there had to be a reason for it.

“What are you getting on the frequencies?” he asked calmly.

She shrugged. “Nothing except for a simple docking channel on static.”

“Any response to attempts to raise them?”

She beamed a big smile. “This is going to be our big pay-day. We tow that hulk back to civilisation and that’s our pay for the year made in one.”

Tubs coughed, and they both looked around.

“I hate to be the realist,” he began timidly, “But our drive core is offline. We aren’t going anywhere near civilisation until we get it fixed.”

“How long will that take?” asked Zoë.

“Will it let us tow that hulk?” she asked, sensing the possibility of defeat after getting so close to success.

“It’ll tow,” he said after a moment’s pause, “But I would be happier not pushing it.”

“We can’t leave something this big just drifting!” she exclaimed, the disappointment clear.

“We could come back for it after getting the drive properly repaired,” offered Dezza, trying to be diplomatic.

Zoë was not having any of it.

“At the very least, I want to move in closer and scope this baby out. We can do that on the ion drive until the core is back online.”

Tubs had to concede they could do that at the very least. It was clear though that he did not want to. Something was bothering him.
Posted by Jennyemily at 11:20