The long summer of war, part 2 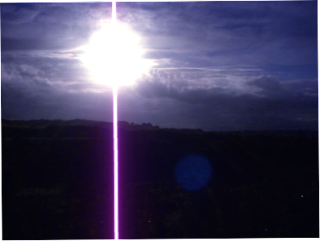 The trip on the boat had been long, and despite the calmness of the sea they had been seasick. It was no place for those who loved the land to be out here on the endless sea. When the boat had at last come close in to the mountains that rose from the twinkling waters, they had been thankful to arrive.

They had come with such high hopes after the bitter news that they were to sit out the war in the barren islands. It was as well to try and make the best of things. But despite the veneer of politeness by those from the company that had met them at the pier, it was clear that these were island folk who did not readily accept the idea of others coming to them to do, as they saw it, their work.

James had seen to it that the first place they would go was to the hotel – if indeed the house they were directed to could be called that. In reality it was little more than a company flop house, more fitting to accommodating the transient workers for the mines than a newly married couple venturing out from civilisation to the frontiers for the first time.

The man from the jetty had shown them up in silence. James had enquired politely about this and that, trying to instigate small talk to ease the tension. The man replied little other than one-word answers, clearly intended to be the end of the conversation.

Inside an inn lady had shown them to their room by flickering lamp light.

“Power’s out again,” she had said gruffly in way of explanation, “The company’s plant keeps browning out the town so it is easier not to bother with the electric.”

Once at their room the inn lady left with barely more than a grunt, taking with her the lamp. James tried the light switch, and of that the lady had at least spoken the truth; it clicked over uselessly without effect.

Scrambling in the semi-dark, they managed to undress and climb into the bed. The blankets were made of scratchy wool, but at least they were clean and warm.

James sensed in the darkness the mood of his wife.

“It’s not forever; just one night, Annie,” he said.

“Things need to get better,” she replied, “I knew we shouldn’t have come.”

He felt his heart sink. Her reaction was becoming what he had feared it would be.

“They will,” he assured her, though he was not so sure of that fact himself.

In the morning they had risen with the rising sun; the curtains on the window were thin and it streamed on in to wake them. Despite the scratchy blankets they had slept well, tired from their overseas journey.

Dressing quickly they gathered together their belongings and crept downstairs to the front desk. The inn lady from the night before sat behind it reading a dog-eared paperback that seemed as if it had been read many times before in careless hands.

She looked up and without word held her hand out for return of the door key.

James held back. “What about breakfast? The company said the stay here would include a breakfast for us both.”

He felt sure that he could smell cooked bacon from the kitchen faintly on the air.

The inn lady’s hand never wavered outstretched for the key. “No power for the cooker.”

He gave up and gave her the key. There was not a word as they both left in silence with empty stomachs, though he felt the inn lady’s probing glare on his back as they went.

Annie had not wanted to come. From the very start, James mused, she had been against it. He had told her he had had no choice, and that much was true. The company had insisted and the war department had sanctioned it. You could not argue against that or they would mark you down as a troublemaker, and there would be no career after that anywhere. The company held much power and influence. So it had been the lesser of all evils to accept and come.

The all terrain vehicle bumped up the rough track leaving the town far behind. He had been given a map by the stone-faced company official who had also given him the vehicle. Everything else seemed up to James from the details that he had been given before he had left the mainland.

They knew there was much to mine and refine on the islands. Here, on the biggest, there was certainly that. But the plants were becoming old, and the workforce seemed set in its ways. The islanders did not like to be told what to do, and did things in their own way – that he had already witnessed first hand on their arrival.

Yet here he was, an outsider in their midst telling them what to do. He had six months to turn production around, and he knew from the walls of silence he had continually met that the locals resented him already.

Annie had stayed in the town. After the stony experience of the flophouse, they had not wanted to go back. She had spent her time in the few shops there had been on the main street whilst he had been to find a company vehicle. Eventually he had returned with this, but she had served her ultimatum.

“Neither of us do,” he replied.

“No. You don’t understand. I didn’t want to come, and since we’ve arrived I’ve hated it even more.”

“We’ll be moving up to the villages out in the mountains soon. We’ll have a place of our own as soon as I can find one, then we can start making a home.”

She waved her hand at him, her voice cracking with the pent-up emotion.

“No. I’ve heard what the villages are like; even worse than the town. The people don’t want us here, and it shows.”

“It’s just for a few months,” he had soothed, “Until I get the company back on its feet here, then we can go home.”

But she had not caved in. Eventually he had had to leave her in the shops whilst he arranged for accommodation there. It was not much, but at least it was a one bedroomed flat above a fish shop. Contrary to the inn lady’s tales, the electricity worked and there was a kitchen and running water.

When he finally took her back there, he was relieved to find her satisfied, for now.

“It will do. I shall stay here and you can come back each night when your work is done. I don’t like the stories I’ve heard of the villagers on the rest of the island. Even the people here call them backward.”

And that had been the way it was, with a two hour drive each way up the valley track that followed the railway closely that brought materials down from the mine in the hills. It was not ideal, but he knew he had to appease her for now or she would go.

The track was rugged and progress was slow. It wound up through the steep-sided valleys alongside a narrow railway line that linked the mines with the docks. Twice before he reached the first buildings of the mines a train passed him. First heading up the valley, then back down heavy with ore. He considered asking at the company if they would let him hitch a lift to and from the town; it would save a great deal of time on hazardous roads.

Those at the mine greeted him with the cold politeness of those who have to only because of their job. He rather got the impression that if they had had any choice in the matter they would have happily sent the outsider they saw coming to tell them how to do their jobs packing. But they had no choice.

He was glad to be on his way. There was much he saw wrong with working practices at the mine, and there would be a report sent back to the mainland recommending change. Hopefully that would then be the end of this wretched assignment. But for now he had a job to do.

In the hills above the mines there were further mineral rights to explore. The refining plants were not running as efficiently as they could, nor were they at capacity. The local workers and managers felt happy to adopt a laissez faire attitude, but that was not what the company on the mainland wanted; they wanted expansion and massive increases in capacity.

He was glad to be back in the all terrain vehicle. At least here he did not have to deal with people, just yet. With no-one to look over his shoulder with the wary eye of the islanders watching the outsider, he could get on with enjoying the day and seeing what he could make of it.

At the side of the track the railway extended beyond the mine on a spur for a little way, before trackless earthworks stretched a little further too. He checked paperwork he had brought with him; there had been plans to expand that had never quite been made anything of. Well, maybe it was time to change that.

Eventually the earthworks came to an end, and the rough track wound up high into the hills. He passed first one village, then another. Locals eyed him with deep suspicion, as if anyone not from their village was an outsider. The manager at the mine had warned him of this. It was about the only thing useful that the man had had to say.

At one point the track split in three, each one pointing to a different valley, climbing higher into the desolate mountains of the island. A village that was little more than a cluster of farmsteads sat at the crossroads, and he stopped to get his bearings and to ask the way to the tops.

It was as if he were a leper; none would talk to him. In frustration he was forced to make his own way and choose one of the tracks.

The journey proved fruitless, and soon it became clear that the track was turning to follow a valley back down to the sea. Turning his vehicle around, he returned to the village. This time he did not even bother to stop and ask, but chose another track and headed on up into the mountains.

At the next village he tried to stop and ask, but it was the same reaction as at the other and none would talk, so he headed on. Higher into the morning air of the mountains he went on until the track turned and he spied a girl sat on top of a rock, watching him come up the track.

Almost out of desperation, he stopped and got out to try and ask if he had come the right way. Perhaps she would be less hostile than the other islanders had been?
Posted by Jennyemily at 11:34