The loneliness of the long distance trucker 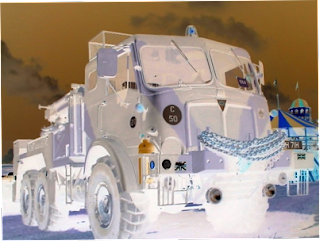 My office has ‘Scania’ written on the front. If I don’t like the view out of the lovely big window, I just move my office somewhere new. I bet there are not so many people who could say that about their own boring nine-to-five offices. A place where co-workers mither you in an omnipresent battle over who has all the staples and why is it me who always has to refill the coffee pot.

I never get that. Once I am on the road, that’s it. I am my own Mistress for the day. The cans of Coke on the dash are mine, and mine alone. If I happen to have to step out of my office for a few moments to do something of importance, then hey, that’s not a problem because gosh darn it my Coke stays put and isn’t drunk by that spotty kid from accounts who is new.

A life on the road.

I am the diesel cowgirl; a rig jockey across county borders the country over. I am one of the breed of people who shifts the bits and bobs that make this island nation tick from A to B. Often we call at C through to Z on the way, but that’s business for you. We are controlling your destiny, or at least the supply of staples and coffee to your office.

Imagine having that power at your fingertips. The lure of the open roads. Those shimmering ribbons of tarmac stretching from here to the horizon and beyond, where this nomad race of truckers live and breath as they conquer the jungle that is modern civilisation.

I dream of a day when these shimmering lanes of sun-bleached temples to the Gods of Automotivity will be free and empty as far as the eye can see. Cruise control on, tank full of derv there will be no stopping, no gridlock, no tail-chasing traffic and no queues for the bogs at the service stations.

Unfortunately everybody else wants the same, and that sort of fecks things up good and proper. No sooner does 8:00am pop up on the dash-clock than the roads inexplicably fill up with hundreds of thousands of people all vying for that same little slice of black tar.

And right now we’ve been fecked over good and proper in the outskirts of Wolverhampton by a whole succession of traffic lights on red. Nothing is moving; I swear I could walk faster than this.

My mind begins to wander, and I think back to the oddest job I ever had.

It’s delivering coffins to the Undertaker. Nothing more, nothing less, but it’s a skive, and it gets me out of the house. It also enables me to meet a whole host of interesting and enlightening people – it is only a minor formality that most of them are dead.

Dead people are okay, no really. Before I hear the chink of the men in white coats trying to pick the lock, I feel I should explain myself here. Death is just the gateway to the next level, and you can really feel for these people as you see them lying there on the slab. At last they are peaceful and at rest.

It is sad in a way, that this is what it’s all about in the end, but hey, it comes to us all. A lot of these people might have led unhappy lives, especially considering the lot of a pensioner at the end. Sometimes I do shed a tear when I think what some of these people went through.

Many are War veterans; waiting to get their medals pinned to their chests for the final journey. They gave a lot to the rest of us in their own little way, going forth to make up life’s rich tapestry of threads, and doing what they believed in.

Then they retire, and find they are getting screwed into the grave. So many times I’ve heard the stories of what can go on before the body has even got cold.

Families can be just like a biblical plague – a swarm of locusts. They swoop in to pick the corpse of the departed life clean. Furniture, money, trinkets. Everything can be cleaned out. And then the squabbling begins.

To cries of “That ring was always intended to be for me” and “you’ve got X, Y and Z in the will, so it’s only fair I should have this” the fighting and bickering begins.

Who needs enemies when you have relatives? Because the problem is that, in essence, everybody is related to somebody who if they weren’t related to them, they would have punched their lights out and changed the locks a long time ago.

Remember, these people are just like those shits out there on the street who push in front of you in the Post Office queue, or who burgle your house when you are away on holiday.

Why shouldn’t you deal with them in the same way? Because you’re related, that’s why. It conjures up a huge feeling of guilt inside – after all, they’re kin.

Bullshit. Let’s talk brass tacks here. Keep an eye on them, you know who they are, and take the same precautions that you would over some-one who didn’t marry your sister.

The Undertakers aren’t so bad. I rather unfairly liken them to the character ‘Egor’ in most Dracula films. They’re nice people at heart. Kind and caring.

And the get excited by coffins

If you thought you were on the edge of normality by liking the smell of the white board markers, or that new office furniture smell whilst ‘on-the-job’ then be reassured that you have nothing on these guys.

There have been times when I’ve turned up with a fresh load of supplies, and these dudes could almost have been preceded by a hard-on coming round the corner. No kidding, really. It’s like being mobbed by canoes. I suppose it takes all sorts to make a world.

In Rotherham they mob the tailgate as fast as I could get the little trolleys of coffins to the back of the lorry:

“Oh! We’ve got some 19J12-32s!” mutters one Undertaker with delight, as a particular model of coffin is wheeled to the back.

His companions come scurrying from the recesses of the dark building like excited Bees that have found a particularly sweet flower.

In that way that other people might fawn over a brand new car, these guys are now nuzzling the lines of coffins as if they were the very latest in trend-setting technology.

One of the Undertakers looks up, sensing the gaze of the worried unbeliever.

Then they load the coffin onto another trolley, and wheel it away at great speed by six excited Undertakers into the recesses of their coffin store.

I could go and see what they’re doing… but I scare easily, and the smell of embalming fluid close up plays hell with my sinuses. I dread to think what they’re going to make of the upgraded 14Z10-66s I’ve still got for unloading.

I can see the bushy eyebrows of the Undertakers in my mind’s eye even now, doing their best Roger Moore impressions. Simple pleasures.

It isn’t long before they reappear, eager and chattering about the extra space of the new model. I dread to think how they put it to the test.

They can strip an entire 18 tonner clean in less than twenty minutes. And that includes the time taken to drink the tea. If it were ever possible to get tea poisoning, then this is the job to be.

I can imagine it now: turning up at the pearly gates, and when the queue shuffles you to the front…

The Angel’s gaze swivels down to the bloated belly and he looks at his notes once more.

“Yes,” I respond, not really knowing what to say.

It had all come on quicker than I had imagined it would. They say that there’s a light in the sky and a tunnel that reaches down to you lined with ethereal forms. It was only one more cup. One mug of the elixir of the road. Milk no sugar.

They’d been wheeling it out all day and it was kind of hard to say no. It was free, and hey! I’m a truck driver. The day I turn down something that is free is the day I, er, die.

I scratch at the back of my neck trying to avoid his quizzical gaze in the perennial synchronised pavement and ceiling inspector’s waltz (Or in this case clouds and more clouds. Oh, and isn’t that a pearly gate over there…).

“Sort of,” I mumble. I guess he doesn’t get many truckers here.

“I’m sorry,” he says in a voice of eternal understanding, “This is a first for us. Usually it’s heart attacks or clogged arteries by the time truck drivers get here. I guess you weren’t hardcore enough.”

Talk the talk, but don’t walk the walk. He gestures to the gate and I shuffle on through. Behind me the Angel shakes his head and turns to the next in the queue. As the clouds billow around I hear strains of conversation floating.

“Mrs Smith? Good. What was that? Reincarnation?”

A rustle of paperwork.

“Oh dear, accounting’s made a mess again. Just stand to one side, and I’ll see if I can get things straightened out.”